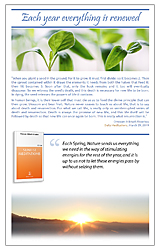 Created in 1971
for the distribution of the works of the Bulgarian-born, French philosopher
and pedagogue Omraam Mikhaël Aïvanhov

The work of Omraam Mikhaël Aïvanhov originally existed as a collection of several thousand talks given spontaneously in French over the course of fifty years, in the form of stenographic notes and audio and video recordings.

Prosveta thus presents a rich catalog of more than 120 books (four principal collections, including one of pocket books), CD’s and DVD’s.

Since Prosveta’s inception, close to 6 million works of Omraam Mikhaël Aïvanhov have been translated and distributed throughout the world in more than thirty languages. 150,000 publications are distributed each year.

The Prosveta internet site transmits the “Daily Meditations” free of charge in a dozen languages to tens of thousands subscribers and receives over a million visits annually, testimony to the public’s growing interest in the author and his works.

A great part of humanity, now inundated by materialistic and intellectual knowledge, seems to have lost its impetus to search for higher truths. And it seems to aspire no longer to a purer, simpler, more joyous and enthusiastic life.

But the great re-emergence today of classical texts and those inspired by the great eastern and western spiritual traditions testifies to the fact that in the human heart there is the growing need to explore the deepest meaning of life and to realize it, to live it above all in one’s own conduct.

Understanding the human being’s role in creation and his perfectibility is the central theme of the publications of Editions Prosveta.

PROSVETA DISTRIBUTED THROUGHOUT THE WORLD